No products in the cart.

No products in the cart.

Home » Spotlight » News » A Crown for the Queen

A Crown for the Queen

A Crown for the Queen 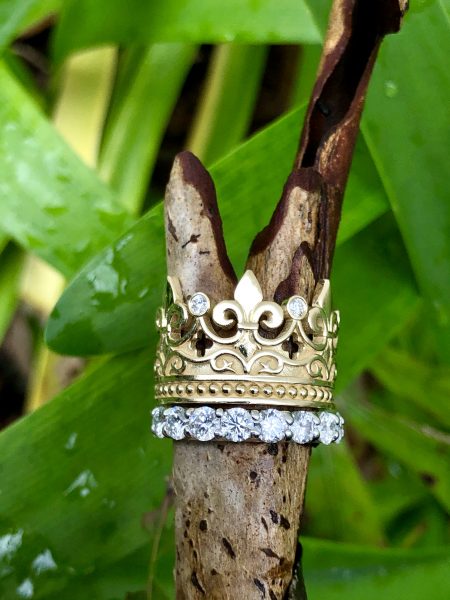 Vanessa Edwards has long been the queen of custom design at Pav & Broome Fine Jewelry, but this year, she expanded her kingdom by becoming the Queen of the Mardi Gras Krewe of Venus and wanted to create a memento to remember her reign.

“I had the pleasure and privilege of being a charter member of the Krewe of Venus here on the Gulf Coast, but we moved away shortly after that. Approximately 5 years ago, a dear friend suggested I join her Mardi Gras krewe whose motto was just ‘to have a ball’, a group who wanted to meet several times a year and have a formal Mardi Gras ball to celebrate. Lo and behold, it was the same krewe I was a part of so many years before. I have been a part of the Krewe for the last five years, serving in different capacities. I have been on the board as well and twice I have “rented” my husband out as a duke for two different ladies who needed an escort.

This year marks the 30th anniversary, and my husband kept asking when I was going to be on the court or queen, so this summer I put my name in the drawing for the position of queen and got it!  I will become the 30th Queen Venus when we hold our ball on February 15th at the Hollywood Casino.

I’ve always enjoyed designing the crowns and jewelry for some of our carnival krewes here on the Coast, and I knew if I was ever on a court, I’d have something made for myself, custom of course!  I chose a ring so that I could wear it more frequently and a band style that could be dressed up with a diamond band underneath or worn on its own for a more casual everyday look.  It has been a conversation piece, and I can’t tell you how many people want to try it on.  I think we all want to be ‘royals’ a little bit.”

Whatever the occasion, we can design and create something to commemorate, celebrate and memorialize your special moments meant to last.

Price: $0.00
Style No. :
Chain:
Metal: , ,
Gemstone: , ,
Total Diamond Weight:
Collection:
Our website consists of a sampling of in-stock and available merchandise. We recommend you visit our showroom in downtown Gulfport to shop the full selection of bridal and fashion jewelry, watches, accessories and gifts. Due to the large number of merchandise available from hundreds of designers, including our own designers in-house, we cannot provide a full list of items available on our site. Inventory is subject to change and may not currently be in stock, most can be ordered and available within a few days. In these cases, we do appreciate your understanding and patience.
*Price and availability subject to change.
*Diamond and Gemstone total carat weight represents the approximate carat weight of all diamonds or gemstones set unless noted otherwise. Diamond total weight may vary between 0.01 and 0.07 carats.